skip to main | skip to sidebar

Much more success today. I love this one but without his face so directly in it we found a better one. Still aren't they perfect? 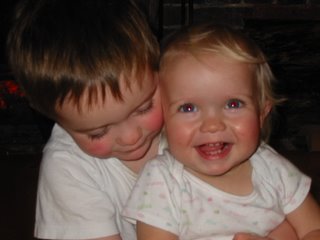 I need to update after vacation. Two days in Charleston, 2 in Savannah, 3 in Atlanta. Very fun. The first vacation in a long time where I wasn't dying to get home at the end. Rented a "rockin, rockin Crown Vic", saw alligators and rednecks, ate lots of turkey and southern food, much sweet tea. We're finally all back in place with clean laundry and a day at school and skating lessons. I think life has settled.

Just in time for me to have jury duty tomorrow. Sigh.

Oh and how do people get super cute pictures of two kids for their holiday cards? I need to trick them. I'll enlist my husband's help for the second attempt. They primarily turned out like this. Maybe I use it and call it artsy.

I hope I don't jinx us by saying that we're mostly healthy now. Babygirl still has the stuffies, so she can't eat/drink and breathe at the same time, but compared to a fever of 104.7, this is easy peasy. Still on nasty Augmentin, which causes even nastier diapers, but we'll live.

Nino is done with his antibiotics and is no longer complaining. We've had many head knocks all around this week but other than some starting-to-brown bruises, we're fine.

I'm also in much better shape this year for christmas already. I have found some wonderful things and am hoarding them. The kids are getting a play kitchen. I ought not to buy a single other thing for them, but know that's impossible. I've also discovered how much I love H & M's kiddo stuff, so if you're in the buying mood for my kids, go there. I only bought socks and gloves because I was running late. I'm going back.

On the other hand, I have no clue what to buy anyone else. I want to buy things that are fun and not clutter. And not spend so much money. Not so hard, right?
Posted by Hil at 1:51 PM 1 comment:

"Momma, some donuts have frosting on them?! Can we try those some time?!"

Sometimes it's nice to control a view over the counter.
Posted by Hil at 1:16 PM No comments:

I think we had about 13 hours without illness. Nino is still on antibiotics, but feeling fine. Missymiss ran up a pretty good fever today and has the telltale head lumps. Everyone is asleep now.

I'm in the process of watching the really long Thorn Birds. I just read the book. It's a bit weird to watch a movie in several days.

And the Carter's outlet rocks. Expect to see photos of Ms Thing in her new $3.99 Turkey outfit. Pants *and* shirt for that. And several other christmas treats.

Wonderful weekend, too much food, fun time with visiting friend. "Momma, I sure do miss Julie" about 3 hours after she left.
Posted by Hil at 9:36 PM No comments: